Lady Fatima (s) was the only daughter of the Prophet Muhammad (s) and Lady Khadija (s). She was born on Friday 20th Jamadi us-sani, five yearsafter the Holy Prophetdeclared his message. The Holy Prophet had lost 2 sons Qasim and Tahir, in infancy. After the loss of Tahir, Makkans led… 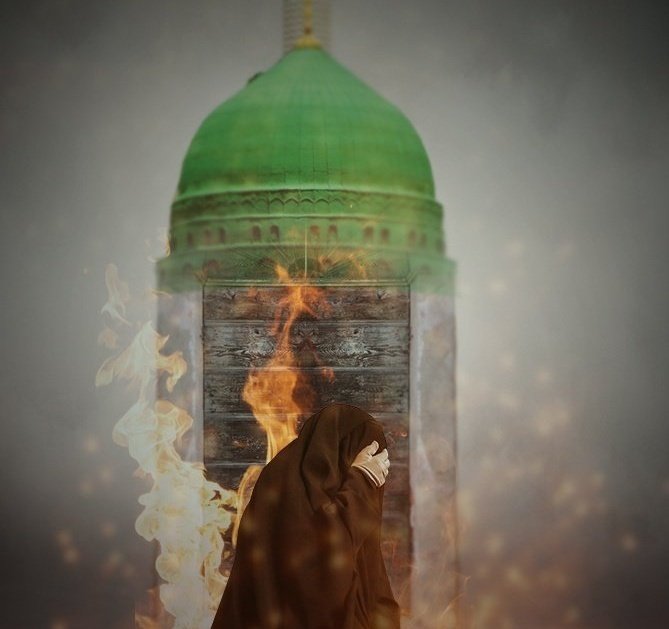 Fire at the door of Bibi Fatima (s.a), the daughter of the Holy Prophet Muhammad (p.b.u.h)

When Prophet Muhammad (p.b.u.h) departed to the eternal world. Bibi Fatima (s.a) missed her father very much and it was shocking to see the changes around her. Madina had changed so soon after him. Bibi Fatima (s.a) was carrying her fifth child who would be called Mohsin (a.s). Then suddenly… 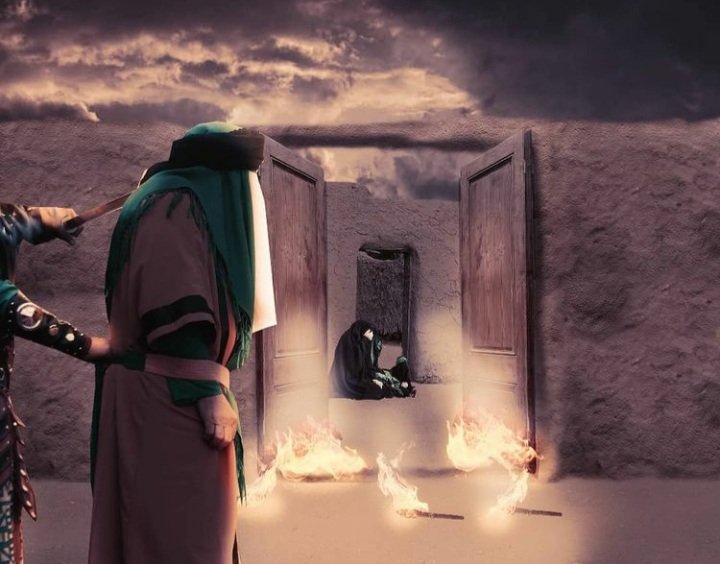 The first reason was that it was Holy Prophet’s Will to be Patient & Imam Ali (a.s) patiently followed the Will. Holy Prophet(p.b.u.h): “O Ali, certainly you will face many difficulties after me. The people will challenge you & oppress you. Should you find helpers, wage battle against them and…

Martyrdom of Bibi Fatima Zahra (s.a) and her last days

Martyrdom of Bibi Fatima Zahra: After the brutal attack on her house, and the loss of her unborn baby son Mohsin (a.s), Bibi Fatima (s.a) fell ill. As days passed, she became weaker and weaker. It was only seventy-five days since she had lost her father, but each day seemed… 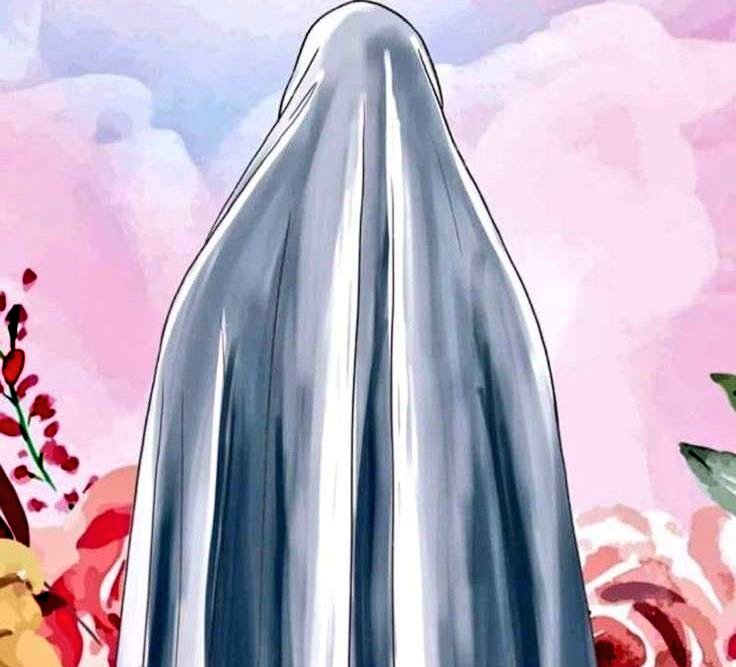 The generosity of Bibi Fatima (s.a)

The daughter of the Holy Prophet Muhammad (p.b.u.h), Bibi Fatima Zahra (s.a) was always generous. No one turned away empty-handed from her door. The very next day of her wedding she gave away her new dress to a beggar at her door and kept the old one for herself. When…

Fadak was the land that was given to the Holy Prophet Muhammad (p.b.u.h) after the Battle of Khayber, which he (p.b.u.h) gave to his daughter Bibi Fatima (s.a) as a gift. Money from Fadak was collected by her to help the poor. As long as the Prophet lived, Bibi Fatima… 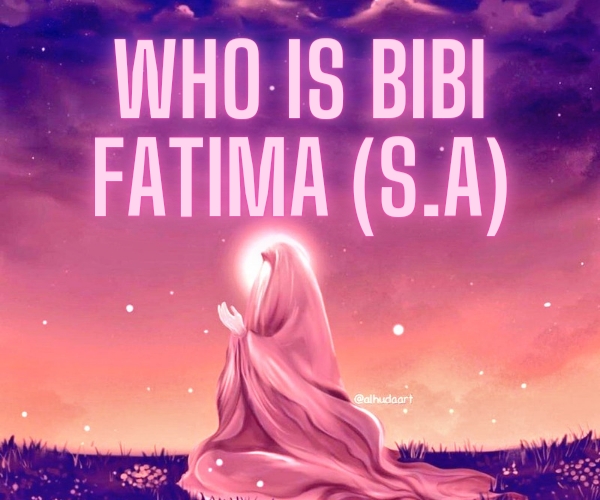 Who is Bibi Fatima (s.a)

Holy Prophet (PBUH) also reported having said: “(bibi) Fatimah is part of me, that which annoys her annoys me, and that which harms her harms me.”

She loved and cared for her father and took care of him when he was sick or injured in one of the battles to defend Islam. After the death of her mother, Hazrat Khadija, she went even more often to the Prophet (PBUH) and comforted him in times of difficulty, so much so that he called her “Ummi Abiha” which means “mother of her father.”

The Prophet (saw) used to stand up to receive her when she visited him. It was clearly against Arab custom for a father to stand up for his daughter. This shows the high spiritual status accorded to Fatimah by Allah.

It is narrated that Anas bin Malik’s mother said: “Fatimah was like a moon in the whole night, or the sun covered by no clouds. She was white (bright) with a touch of pink color on her face, her hair was black and she had the Messenger of Allah beautiful features.”

It is also reported that: “Whenever the Prophet (saw) returned from a journey, he would kiss Fatima’s neck and say: ‘From her, I smell the fragrance of Paradise’.”

Her home environment was an example of harmony, peace, calm, and modesty. She assisted her husband in his worldly and religious affairs and co-operated with him in the attainment of his lofty mission.
It is written in Al-Bihar, on the authority of Manaqeb that Imam Ali (s.a) said: “By Allah, I never teased Fatimah, or forced her to do anything (she did not like), until the day she died, or did she ever angry or disobedient to me. In fact, when I looked at her, depression and sadness would be removed (from my heart.)

Suffice it to say that Fatimah (s.a) raised two boys, Hassan and Hussein, the leaders of the youth of Paradise who were the purified and infallible Imams. She raised two daughters; Zainab and Umme Kulthum. The elder was Zainab (s.a) who continued Imam Hussein’s mission to the court of Yezid bin Mu’awiya and ensured its success.

It is reported in Al-Bihar that a lady came to Hazrat Fatimah with questions, and then repeatedly came with more questions. Then she felt embarrassed and said that she did not want to trouble Fatimah. Then Hazrat Fatimah replied: “Ask me anything that is on your mind…” “My reward for (answering) every request is more than the one who fills (the space) between the ground and the throne (heaven) with pearls; Therefore, I should be more inclined to answer your questions.”

Musawwir bin Makhramah narrated that the Prophet (s) said to Fatima (s), “Fatima is a part of me. Whoever displeases her displeases me.”

Musawwir bin Makhramah narrated that the Prophet (s) said, “Fatima is a part of me. Whatever troubles her troubles me and whatever harms her harms me.”

Abdullah bin az-Zubayr narrated that the Prophet (s) said, “Verily Fatima is a part of me. Whatever harms her harms me, and whatever irritates her irritates me.”

Abu Hurayra narrated that the Prophet (s) said, “The first person, who shall enter Paradise, is Fatima (s).”

Once, the Prophet (s) held Fatima’s hand and said before Muslims, “He, who has known Fatima has known her, and he, who has not (let him know her); she is Fatima bint Muhammad. She is a part of me and she is my heart and my soul that is between my two sides. Whoever harms her harms me, and whoever harms me harms Allah.”

Ahmad bin Hanbal mentioned in his Musnad that the Prophet (s) had said to his daughter Fatima (s), ‘May your father be sacrificed for you!’ He repeated that three times.

The Prophet (s) said to Imam Ali (a), “You will be with me in my place in the Paradise with my daughter Fatimah. You are my brother and companion.” Then he recited this verse, “…as brethren, on raised couches, face to face.”

The Prophet (s) said, “Fatima is part of me, and whoever pleases her, pleases me.”

The Prophet (s) said, “Fatima is the head of the women of Paradise.”

The Prophet (s) said, “Fatima is a branch of me, what pleases her pleases me, and what saddens her, saddens me.”

Traditions the Prophet (p.b.u.h) had said about Bibi Fatima s.a 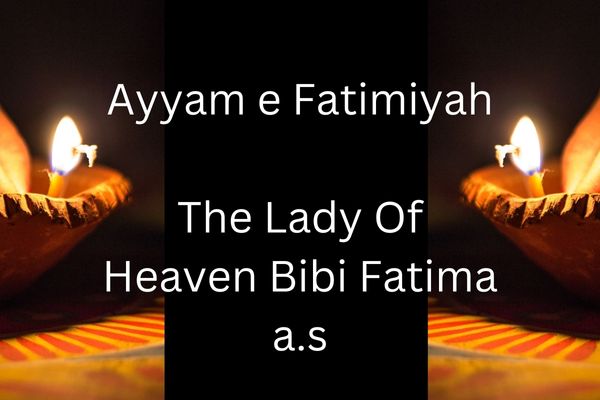 AYYAM E FATIMIYAH (s.a): Antiquarians vary on the date of Shahadat of Bibi Fatima Zahra. Portrayals express that the date is either 75 days or 90 days after the wafat of the Heavenly Prophet (SAWW) which happened on 28th Safar 11 A.H. As per Sheik Abbas Qummi the date would…

These are free resources about Ayyam e Fatimiyah, so Islamic educational resources are available for everyone! Ayyam e Fatimiyya (Arabic: فاطمیة) are days in which Shia Muslims mourn the martyrdom of Hazrat Bibi Fatimah (a.s), daughter of the Islamic Prophet Muhammad (P.B.U.H). Ayyam e Fatimiyya is the window between the two possible dates for her death, that is, from 13 Jumada al-Awwal to 3…

Full Name: Syed Muhammad Imran This individual is a highly skilled and experienced web designer and developer, with a strong background in search engine optimization (SEO). They are an entrepreneur with a proven track record of success in the industry, having founded and grown several successful web design and development…

The Month of Rajab and it’s Aamal

7 Killer websites that will reveal Thousands of Free resources

Top 10 Best Medical School in the United State of America

Advice for a Young Muslim 30 Points

Please disable Adblock for this site.